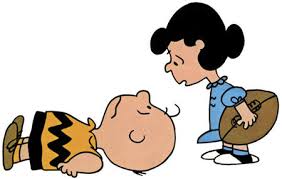 1 thought on “Charlie Brown = Jesus…Better punt that idea before Lucy gets ahold of it.”