I don’t remember the day I was born, do you? But ask any mother about the day her child was born and she will be glad to fill you in.

(Imagine a New York accent.) “Little Johnny came on a rainy Wednesday. Oh yah, he gave me the fits for eleven hours. Johnny just didn’t have a clue as to how to get outta there, so I pushed him! I’ve been pushing him ever since. But anyway, his arm was up over his noggin, the doctor said, so a puny thumb flipped out first like a hitch hika. The Doc fumbled around so only his head was crowning and all. That hurt like a bugga! The good thing was it helped me forget my husband was layin on the floor out cold. He lost it when a nurse handed him a soiled towel to throw in the linen basket. Geez Louise, I had to do the Lamaze all by myself. All that breathing! The nurse took ova holding my hand and started breathing with me. The doc said to start pushing. Golly. Finally, after all the ‘don’t pushes’ and ‘not yets’ I felt like I had the constipations. So I pushed like a motha and screamed like a psycho lady. Lamaze schlamaze! That kid took my breaths away. I swear little Johnny and I were the same color of blue. I bet a dolla he was. Actually, I did swear. More than once, but who’s countin’ at that point. The doc said I was doin’ good, and that I was fully effaced. Ida like to slap him in his efface! Everyone, including my husband, who pulled up beside me again, kept sayin’ to push. With my eye balls bouncin’ at each one of ‘em I yelled with spit comin’ out, ‘I am! I am! Holy Schmoly! Get this kid outta me!’ The doc told me to give it one last big push, which was good, because that’s alls I had left. So I pushed like a weightlifta and out came my boy like a bowling ball. The nurse put him on my chest like a slab of meat and I was so full of the emotions. Johnny cried, for crying out loud, and my husband came in close and all our tears mixed together. I’d go through it all over again! A miracle it was, a miracle for sure.” 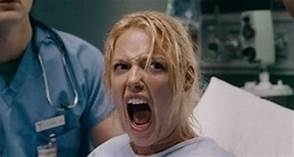