There was a struggle and yelping. I stopped what I was doing and headed for the bathroom to find water everywhere. Our five month old mammoth puppy (Great Dane/German Shepherd/ and possibly Malamute) Charlie was not wagging his tail. The shower head in hand was used like a stun gun. Charlie’s body was riddled with lukewarm streams as he danced like he was listening to big band era music. My son had taken his collar off and a half-nelson around the dog’s upper torso proved non-effective. I suggested putting the collar back on so I could hold on like a bull rider in a rodeo. It was quite a ride as Nathan, my dog-whisperer son, hit Charlie again with the water phaser. Then the shampooing began and the dog calmed down.

We both told Charlie in hushed tones “good boy” as he let Nathan work the suds in.

“So, got any big plans for the weekend?”

I wonder. What is going on in the mind of this pre-teen dawg? He has been a bugger. The jumping and nipping and often in the morning the trash had been sorted out in piles. Dog poo I.E.D.’s strategically placed so only the smell is detected. Then kids were sent, like Forrest Gump, down to the basement to search for the source. I know… child abuse. Not so fast finger pointer! Their mother and I have changed enough diapers that if lined end to end…Anyway, we are not first responders anymore.

“So Charlie, what say you?”

“Well, my nose is in everyone’s business and I can’t control it. I am starved for attention so I figure if I lick and nibble on faces at least I will get talked to and stiff armed. Buford the bloodhound has been napping all the time…BORing. You guys keep taking off without me. I mean, if all dogs go to heaven, as they say, shouldn’t all dogs go to church too. Like Bow…Wow.”

The rinsing began again and this time Charlie was calm as the dirty dog smell left with the bubbles. The clean wet dog smell wasn’t that great either but the job was done. Nathan and I were soaked with the memory. I didn’t want to towel it off right away. In fact, I got me thinking about how much whining, barking, licking, sniffing I have been doing lately. I probably smelled like a dirty dog too. Hmmm, probably time for a bath. 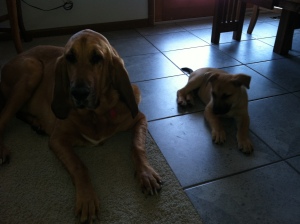 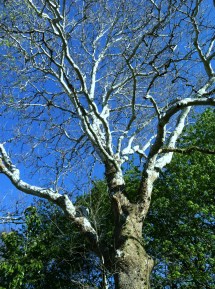 and stretches to the heavens.

It is solitary and strong.

with fashion and grace.

to reveal a smooth

Tan and light brown on ivory

are the shades of color

I long to climb. 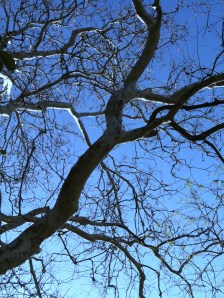 Those branches are beyond reach

and slippery as silk.

I will look up through the freckled limbs though,

What remains of my mother will be placed deep

into the humus to compost

with shards of fallen bark.

Death on death will serve nutrients into the roots. 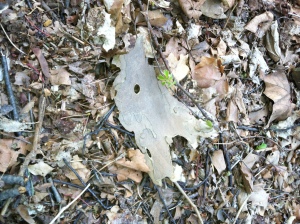 I am thankful for place,

and till memories into the soil 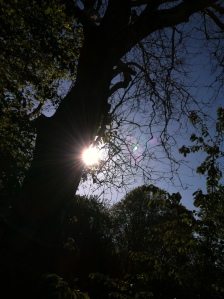