I found them in the street

on hands and knees

about keeping the shadows

filled in with the scrapings.

slowly over the asphalt

and the artists tried to stay

in density and color

as the sun moved

and they held stubs

of pastel and primary

between finger and thumb.

Now the shadow of night

The street light flickers on

and there is no evidence

of asphalt or the cracks

of time tucked in it.

They sat on the curb

and slouched in satisfaction. 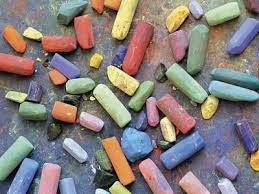 When I was a kid my mother would haul us to the grocery store. Back then it was Meijer Thrifty Acres at the corner of Patterson and Douglas Avenue. There were always bench sitters in the queue right next to the twirling red, white, and blue barber shop sign. There would be three to a bench like a human ellipsis. The dot dot dots were mostly elderly types who had settled in on “old people” fashion. Polyester slacks and smock blouses and prescription shoes the color of…somewhere between tan and gray. The ladies would often have the clear plastic caps on the hair they just had fluffed up. The men would lean on canes with handkerchief s cuffed in their hands; age spots on their foreheads.

How many times did my mother catch me staring? How many times did she swing around to push my pointing finger down to my side where it belonged? To a child people are who they are. Back then people were fat. People were wrinkly. People had long noses and ears. Slips would show. Great gaps formed between the top of argyle socks and the unrolled end of trousers. Facial tics would blink, wink, and purse repeatedly at my unblinking eyes of wonder.

I still stare. Don’t tell my mom. Humans fascinate me. Without saying a word they communicate quite a bit. Just yesterday I saw a cute old man hunched over with lips parted and drooping toward the waxed tile. I imagined him as a youth, upright, full of spunk, and walking at a good pace past the benches of dot dot dot. If the good Lord is willing I might have the honor of being a dot on a bench.

One dot is a period. It is placed at the end of this sentence. But three dots indicate a continuance…a continuance of thought and relationship. I long to be sandwiched between a couple of old, fat, wrinkly, unfashionable people while little tikes point their fingers and say what is on their innocent minds.

I thank God today for life. Louis had it right. Take time today to say hi to a bench sitter…

Could the moon be a peep-hole?

Could the sun be a spot light?

Could the stars be pinpricks of the eternal?

Could the ocean be shedding tears?

Could the tides be inflections in a voice?

Could the waves be ballroom dancing?

Could the mountains be a la mode?

Could the foothills be out for a stroll?

Could the valleys be hoarding  echoes?

Could I tag along child, and wonder around with you?

Could we see if God brought something for show and tell?